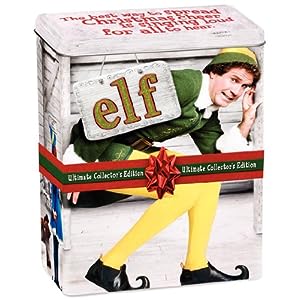 This hilarious Christmas film tells the tale of a young orphan child who mistakenly crawls into Santa’s bag of gifts on Christmas Eve and is transported back to the North Pole and raised as an elf. Years later Buddy learns he is not really an elf and goes on a journey to New York City to find his true identity.

I actually didn’t see it when it first came out, but only about 3 years ago. Can you believe it’s actually been 7 years since the movie was released?

Warner Brother’s is releasing the Ultimate Collector’s Edition on TV and Blu-ray next week on October 26th!


Become a fan of Buddy the Elf on Facebook!

~Mandatory Entry~
What is your favorite Christmas Movie?
~Extra Entries~
1. Follow Warner Brothers on Twitter to stay updated on the latest news!

2. Become a fan of Buddy the Elf on Facebook!